Composting in the news 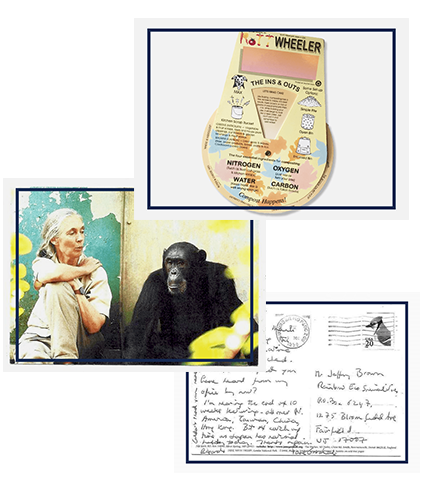 BrandBuilders is a marketing company started by Jeffrey Brown in the basement of his childhood home after graduation from Boston University in 1982, just as recycling was just getting started in New Jersey.  In 1992 our “ecopromo” division was started and so the story begins.

The company focused on businesses and government agencies that were looking to buy recycled content to promote this new concept called recycling. Early customers included Warner Brothers, who regularly purchased our recycled Wham-O Frisbees, Coca Cola, who purchased recycled soda bottle lanyards for not only internal use but also for the Olympics and G8 Summit, as well as the City & County of Honolulu who purchased our pencils made from recycled newspaper.

A highlight was certainly the 2 handwritten letters Jeff received from Jane Goodall who had heard about his business from halfway around the world!

Win-Win Partnerships: How it Works

Our sales have a history of empowering citizens to become a vital part of their communities' recycling program. For example, we have sold over 4,000 composters to Wake County to date.

So here’s the easy math, if each composter were to divert ¼ of a ton of organic waste (500 lbs) that means Wake County residents will keep 1,000 tons of waste from reaching the scales at local landfills or incinerators.  At $75.00/ton to collect & dispose of the waste that is a saving of $75,000/year and there is no cost to the County to maintain each unit, there is no curbside collection required because residents are taking care of their own waste.  It’s a win–win for everyone, especially the resident when they start to use the finished product in their garden or lawn.

Not only do composters reap the benefits in their gardens, but so do their communities.

$0 in Maintenance Costs for Counties

We want to encourage backyard composting so that all individuals can enjoy the benefits which include improving or maintaining high-quality soil, growing healthy plants, reducing the use of fertilizer and pesticides, improving water quality, and protecting the environment. By adding compost you can conserve water and help improve the soil to help hold water in the root zone. Want to learn more? Check out this video.

Why Use a Rain Barrel?

There are several environmental benefits associated with rain barrels. Rain barrels reduce stormwater runoff, water that does not soak into the ground and can transport many pollutants to our local waterways as well as cause erosion. By collecting rainwater for watering lawns, gardens, and potted plants and for washing off patio furniture and tools, rain barrels conserve water. From a gardening perspective, the natural nutrients in rainwater make it far better than city tap water, which contains chlorine and fluoride. With a rain barrel, gardeners can minimize or eliminate their use of chemical fertilizers. Rain barrel water should not be used to drink or bathe. And rain barrels should be emptied and stored throughout the winter months.